“THE NATURE OF MAKING” 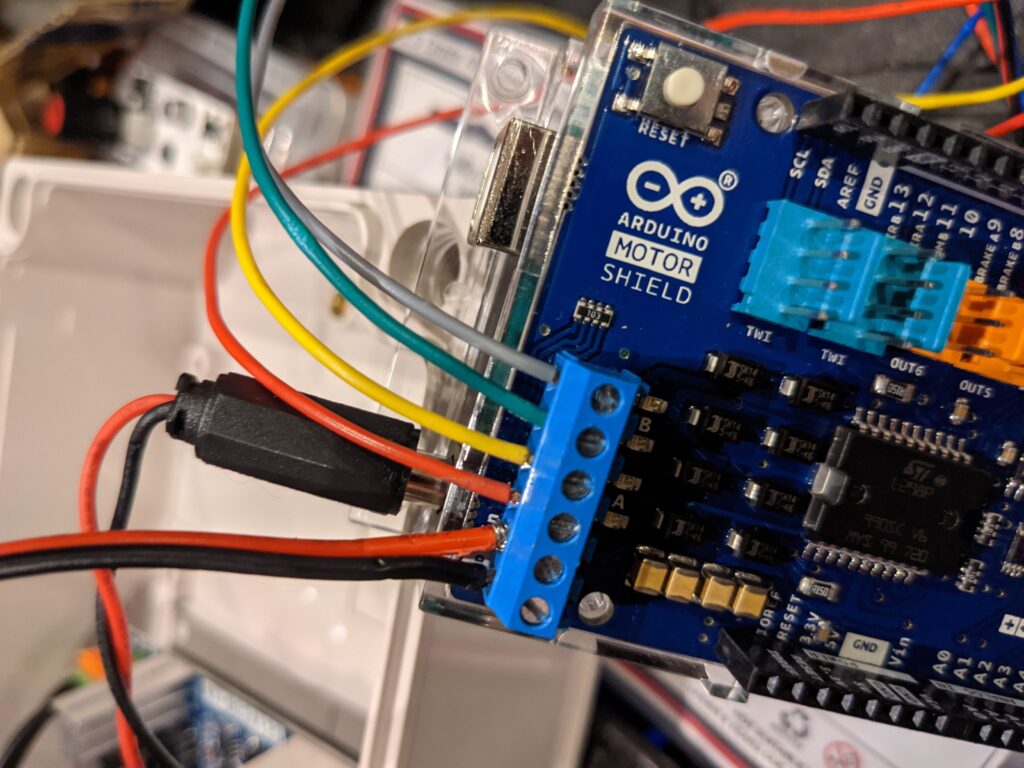 THE NATURE OF MAKING
By Thom Worlledge, AIA

I am a MAKER. My definition of “Making” is the applied use of tools to assemble something. It may be unique, like a piece of art, or it is something that has been made before. The benefit comes from the process not only the product. Tinkering in a shop, knitting a scarf, or building with Legos, we all have made something. As an architect for McKinley Architecture and Engineering I get to use my skill to design how to things are assembled. But Making is not limited to those who have particular talent or skill it is a process that anyone can enjoy. Making and using tools is what differentiates us from the animals, I believe it is part of our nature to Make. 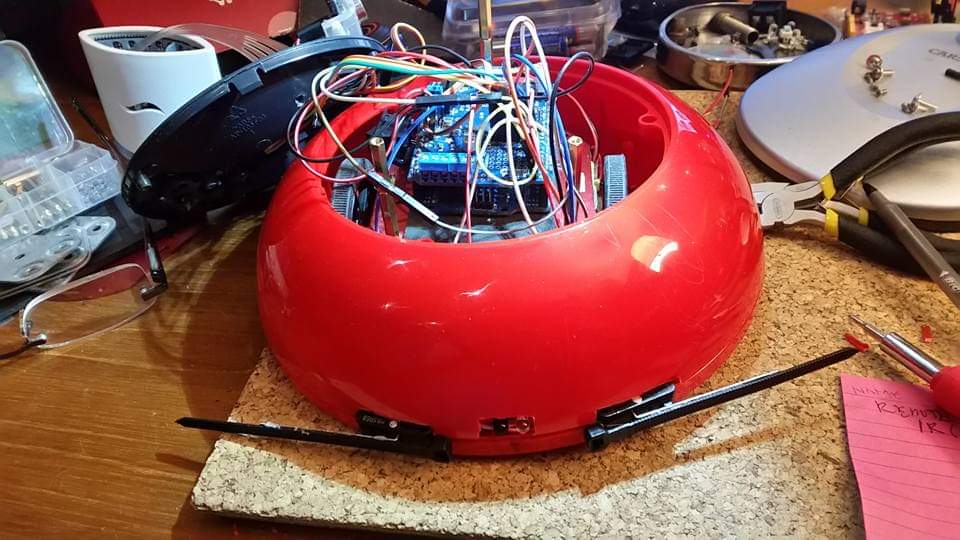 When Dale Dougherty started “MAKE” magazine and introduced the concept of the “MAKER FAIRE” he instantly became the founder of the Maker Movement. MAKE provided a common platform for sharing how to Make something and the Maker Faire a gathering of tech enthusiasts, crafters, educators, tinkerers, hobbyists, engineers, science clubs, authors, artists, students, and exhibitors allowed all of these “Makers” to show what they have made and to share what they have learned. Maker Faires have spontaneously popped up all over the world. I don’t think there ever was a lack of interest in making, (as evidenced by the plethora of DYI shows on HGTV) but Dale Dougherty brought everyone who Makes together as a movement. Now every woodworker, seamstress, home cook, electronics hobbyist, crafter, and artist are all “Makers”.

At approximately the same time as the Maker movement was getting started several related things happened: 3D printers became affordable to the home market, low-cost microcontrollers and microcomputers became widely available and the open sharing of ideas and projects gained a new legal tool. “Open Source” is a concept that allows people to modify and share products because its design is publicly accessible. Originally developed for software, it now refers to something broader. Open Source products, celebrate open exchange, collaborative participation, rapid prototyping, and community-oriented development. Makers and inventors reluctant to share their intellectual property because they wanted to protect their interest, control its use, or just wanted the credit found a way to do that with Creative Commons Licenses. Creative Commons licenses were introduced in 2001 and allow Makers to both freely share their designs and protect their interest. Using this legal tool built on Copyright law allowed Makers and designers to openly share their designs worldwide. By sharing the designs and ideas other designers were able to build upon others’ work improving the product and adapting it to new uses. Web sites like instructables.com, makezine.com, hackaday.com and thingiverse.com are used as depositories for these resources.

When home computers were introduced the first adopters were experimenters and hobbyists. 3D printers like home computers were initially considered fancy toys with little practical use. Expensive 3D printers started churning out plastic trinkets that could be purchased for less that the cost of the material to print it. When I purchased my first computer (a commodore 64) I programed it to play Pong on my TV, not a very “practical” use of a computer. (Now computer gaming is a multimillion-dollar industry.) Makers playing with their 3D printers figured out how to use them and the new low-cost microcontrollers to Make new 3D printers! The RepRap-RepRap was born. RepRap-RepRap is the first self-replicating manufacturing machine. Make one 3D printer use it to make another and share it with someone else to make another. Soon low-cost 3D printers are everywhere. Makers began pushing the limits of the technology. 3D printing, now called “Additive Manufacturing” can print with plastic, wood, carbon fiber, metal, concrete, food, and even human cells. The technology has found its way on the international Space Station and is used to manufacture the rocket engines to get it there. New industries like the invisible aligners for your teeth make use of 3D printing. What makes the technology so unique – Mass Customization. Designs for 3D prints can be shared all over the world, modified and printed again and again. My niece Tracie Kimmel started a business 3D printing monograms for handbags using my brother-in-law’s 3D printer. Due to sales they had to quickly ramp up to four 3D printers going 24-7. 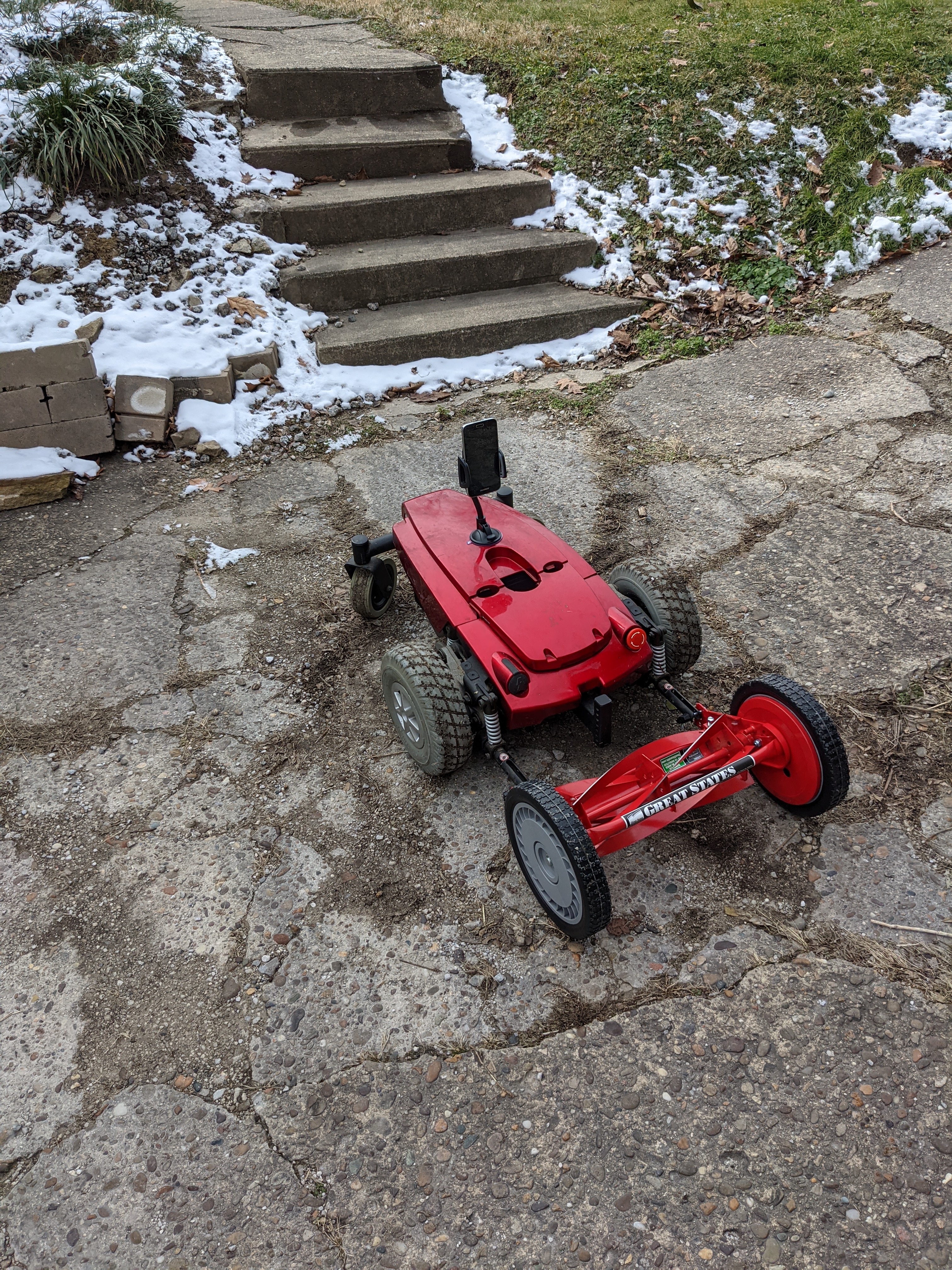 The microcontrollers used to Make 3D printers affordable began to be a favorite component of the electronic hobbyist. The Arduino microcontroller (named after a bar where the founders met) is a programable circuit board with easy to access inputs and outputs that can be programed and run independently. Making it possible for hobbyist to build complex devices like robots and Internet-of-things (IOT) devices using sensors and actuators with little electronics training or experience. I built a device using a microcontroller and an array of cheap gas sensors – with it I detected a natural gas leak in my house. My hobby might have saved my life. 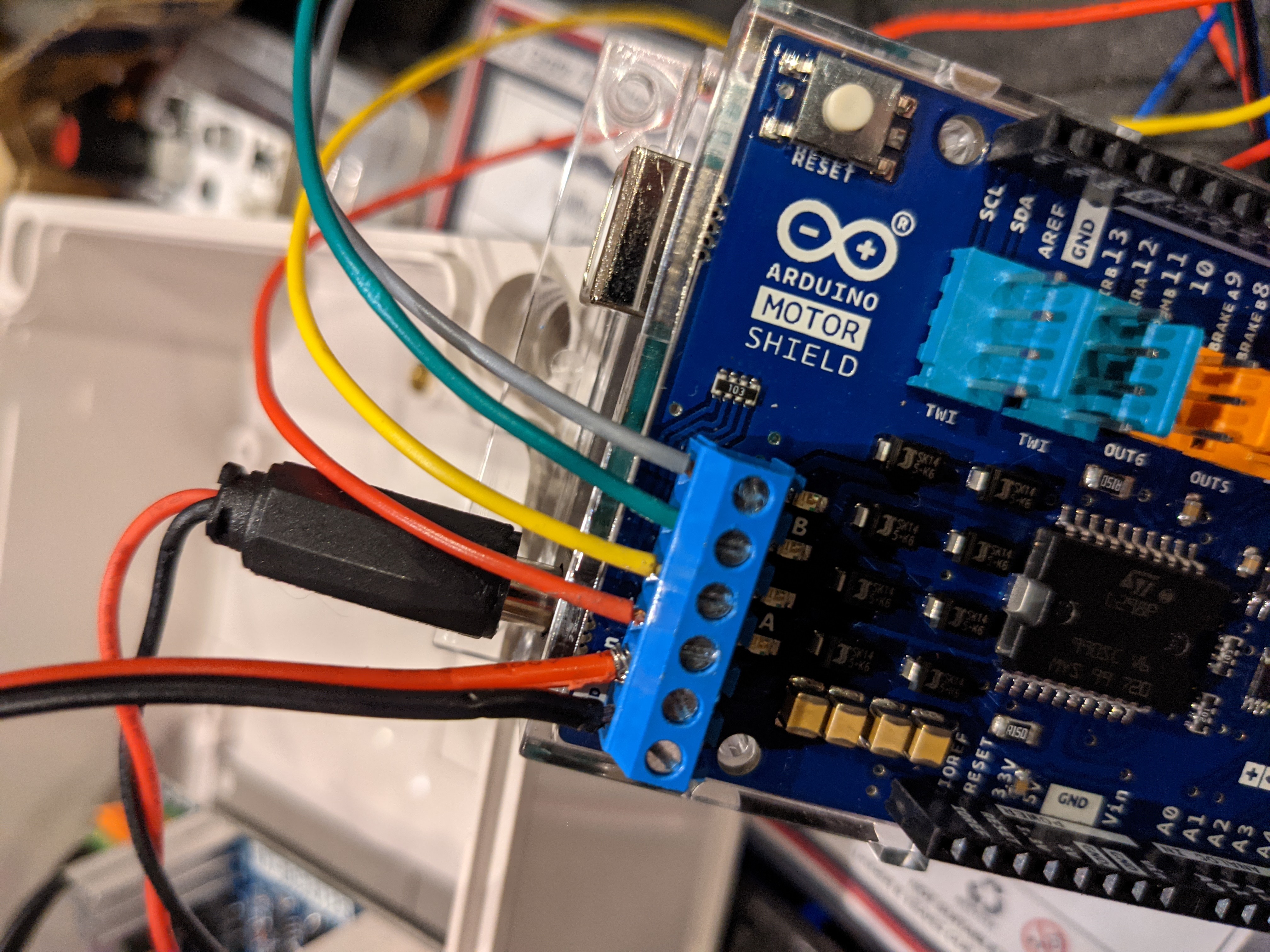 The Raspberry PI microcomputer has dethroned the Commodore 64 as the is the best-selling computer in the world by selling over 30 million units, but most people think it is still something you get at a bakery. The Raspberry Pi (RPi) project started by a non-profit charity as a tool to teach basic computer science in schools and in developing countries. This credit card sized $35 open-source computer is used all over the world by Makers to build many devices and continues to serve as low-cost educational tool. The Raspberry Pi foundation now has a whole family of small single board computers and is surrounded by an ecosystem of education tools and support. I have built Robots and IOT devices with Raspberry Pi’s. One of my devices pulls information off the internet and displays it on a monitor that is viewed through a mirror. It is called a “Magic Mirror” and it is one of the top things you can build with a RPi. A Magic Mirror can display your daily calendar, the weather, an inspirational quote, and many other modules that can be seen through a mirror as you are brushing your teeth. 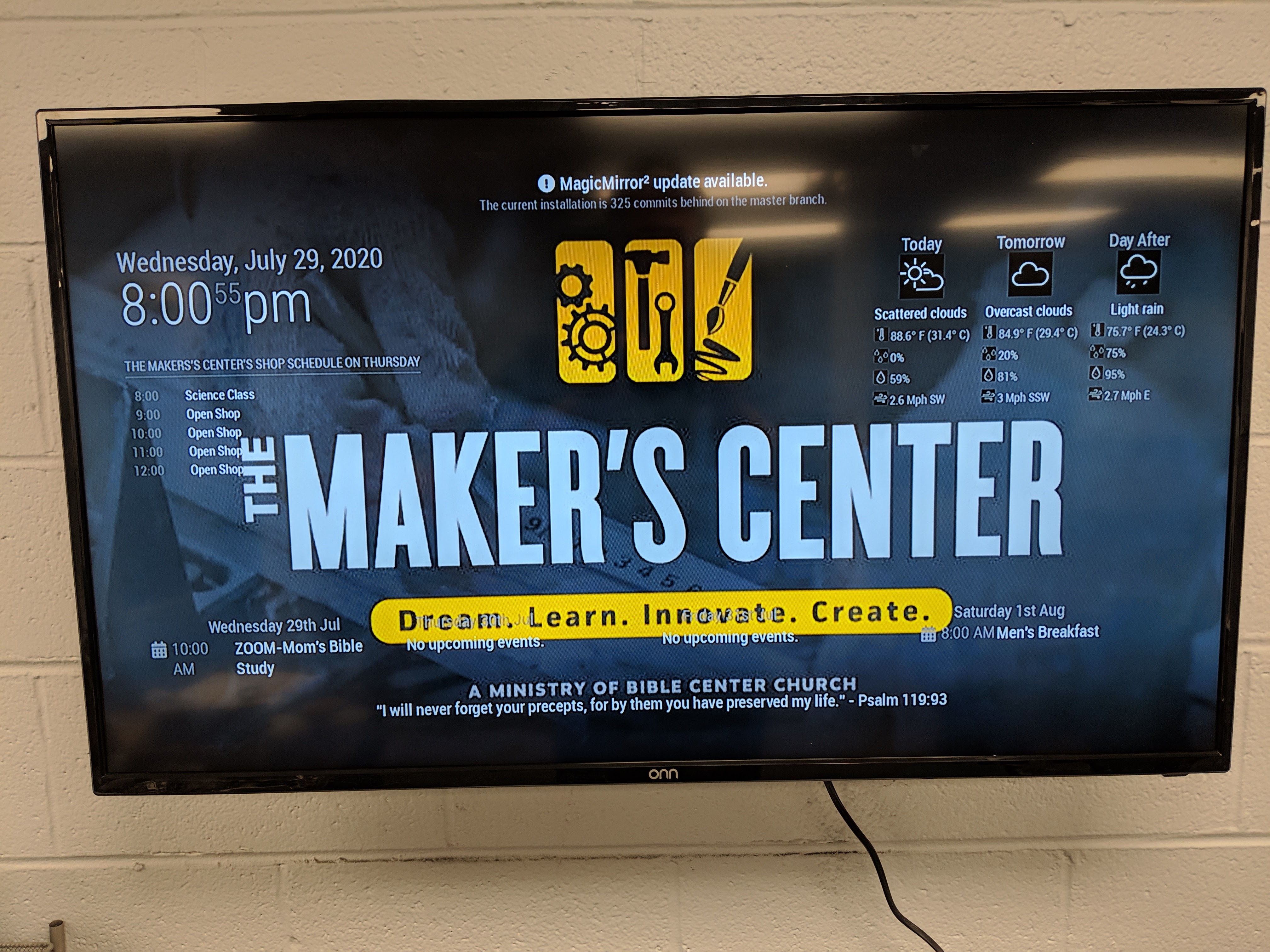 At THE MAKER’S CENTER our local Maker’s space my Magic Mirror is used to display calendar information on the classes available. What is a Makers space? Like the Maker Faires, Maker Spaces were formed in cities all over the world allowing information and tools to be shared and acting as a place to gather for likeminded individuals. I have been involved in the startup of THE MAKER’S CENTER in Charleston, WV. THE MAKER’S CENTER (TMC) is a ministry of Bible Center Church that has a technology classroom, a woodshop, and an art studio. TMC has a two-part mission. During the day it serves as a place to teach people who are recovering from addiction basic life skills, such as how to use a computer, obtain a driver’s license, as well as Making. Flower arranging, cake decorating, jewelry making, sewing, wood working, 3D printing, and soon auto mechanics are some of the making classes that are available. In the evenings and weekends TMC opens to the community with access to the tools and expertise for the use of all Makers. 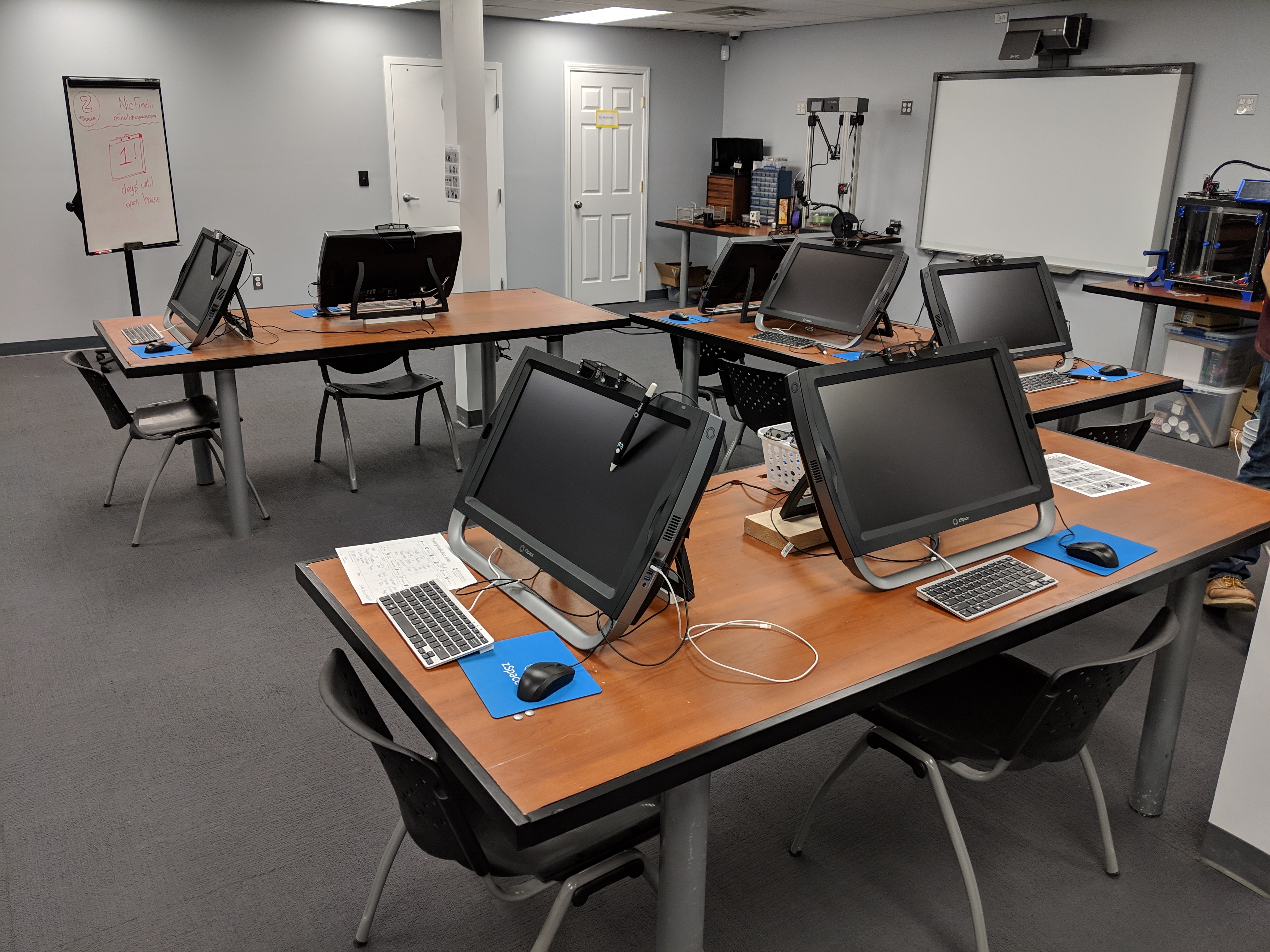 THE MAKER’S CENTER was scheduled to open to the public March 2020; that did not happen. COVID shut us down. But Maker’s came to rescue! Faced with the shortage of PPE, Makers started printing face shields and seamstress like our own Katy McKinley started sewing face masks. Instead of a few manufacturers making thousands we had thousands of manufactures making hundreds. The 3D printed PPE was improved upon by the community of makers eventually were approved for clinical use by the National Institute of Health. But the Maker community did not stop there, after hearing of the lack of ventilators Makers developed a DIY ventilator from off the shelf components to be used in emergencies and 3D printed devices that allowed the shared use of ventilators while preventing cross contamination. While closed to the public TMC printed hundreds of face shields and sewed hundreds of face masks and long-sleeved hospital gowns to serve the community. 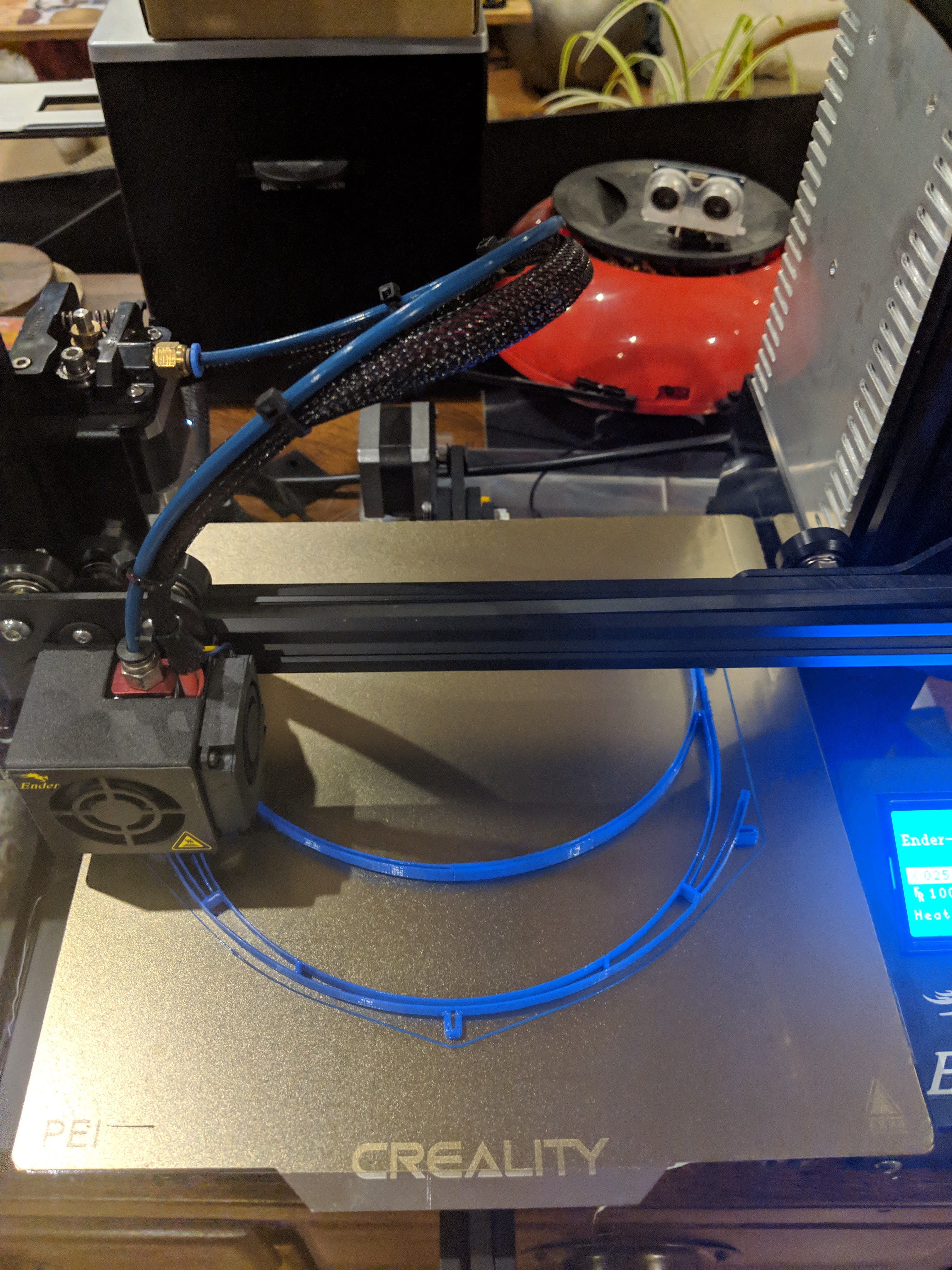 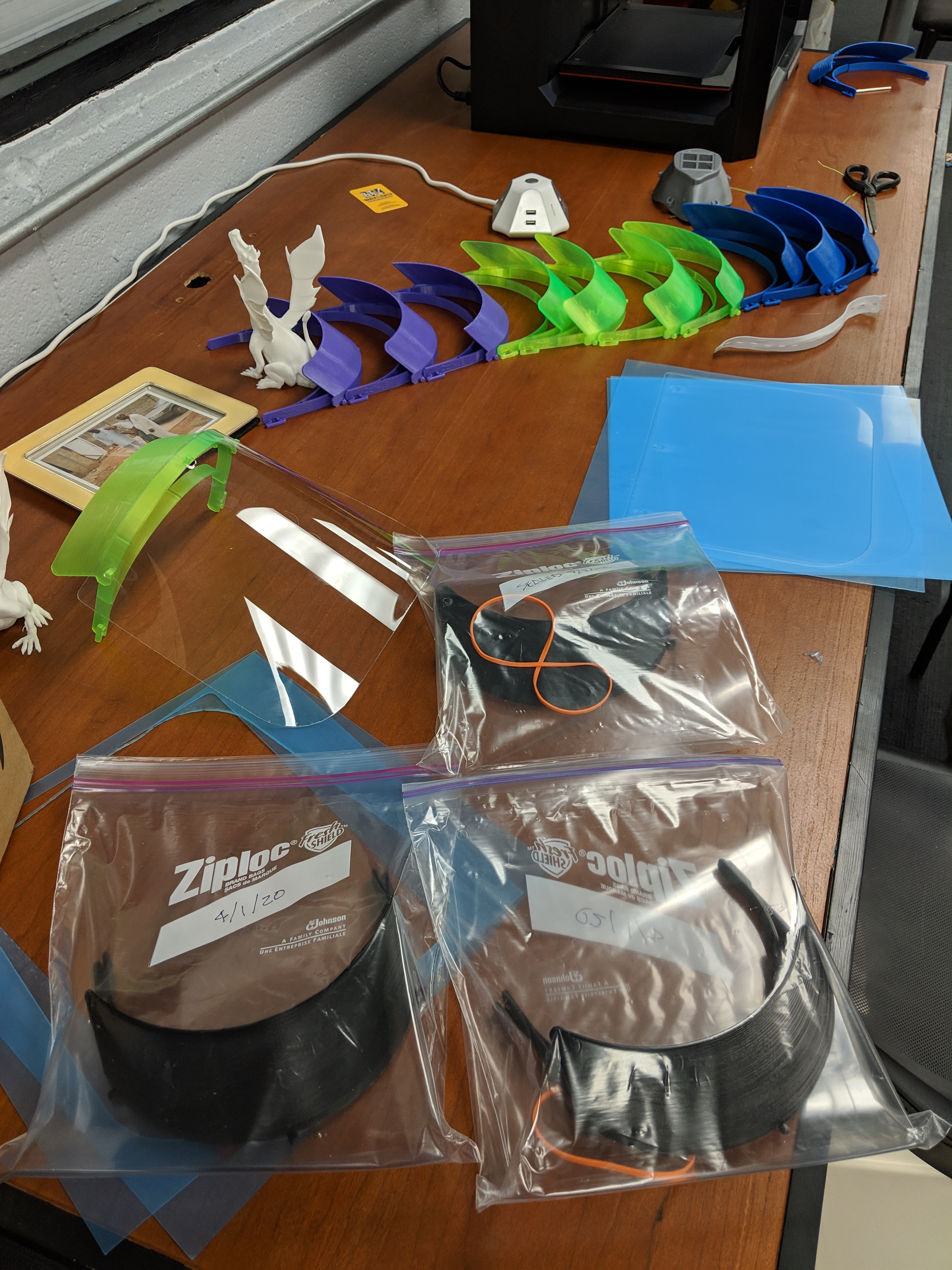 Maker Spaces like THE MAKER’S CENTER began to be incorporated into schools. Over the years Active Learning spaces (Shop Classes) were removed from our schools in favor of more academic spaces. Maker Spaces in Schools can fill that gap and support the hands-on use of technology in a creative environment. Maker Spaces also called Co-laboratories or CoLabs support learning by doing and group interaction. Maker Spaces fit well into STEM and STEAM curriculum and Problem Based Learning pedagogy, student-based learning with emphasis on solutions to real world problems. McKinley Architecture and Engineering designed specialized spaces in Brooke County Middle School to accommodate Making and STEM education. During our recent work with Ohio County Schools, we worked with the county to design Maker Spaces in each school as part of the bond passed in 2019. We expect the need and desire for innovative education spaces will grow and our Architects and Engineers are glad to help you Make them. Now back to 3D printing Pi shaped earrings for my wife, the math symbol, not the micro-computer or the baked good.